Carole regularly attends the Science of Consciousness Conference in Tucson, AZ; most recently in 2020. She has presented her research there, as well as at poetry events and other academic settings. Her work was originally informed by Julian Jaynes's theory on the hallucinatory origins of poetry and prophecy in the right hemisphere of the brain. She was an invited speaker at the Julian Jaynes Conference in Charleston, WV, in 2013, and, more recently, at a symposium on "Further Reaches of the Imagination II" at the Esalen Center for Research and Theory in Big Sur, CA, Nov 1-6, 2015. She was invited to speak at the Poetry by the Sea global conference in Madison, CT, May 2016, but, unfortunately, was unable to attend. On February 23, 2017, she presented her research at the Jung Center of Houston.

Her book, In Their Right Minds: The Lives and Shared Practices of Poetic Geniuses, brings together all of her literary and neuroscientific research and was considered an Amazon Hot New Release in Neuropsychology and Poetry / Literary Criticism. She writes on literary and scientific themes at rightmindmatters.blogspot.com and new research on hemispheric differences, atypical lateralization and handedness on https://www.facebook.com/RightMindMatters/.

She is currently working on a book on female mystics and mediums, beginning with the story of Joan of Arc, and female poets who felt aligned with her. Her stand alone article on Joan of Arc is available for purchase here:

I finally sorted out the "smiley face" responses from their different venues: my own Facebook page, My Left-handed Friends and Jung Hearted Pages as well as the comments on my blog. There were 32 respondents, but not everyone did the further short test for folded arms, foot- and eye-dominance and hand position in writing found in The Eye of the Beholder. Also, two people were unable to perceive the happier guy, so our base is down to 30 responders, with 18 who responded fully. 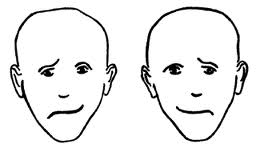 • In Julian Jaynes’s test of 1000 people, 80% of right-handers chose "B" and 55% of left-handers chose "A." The “expected” choice for a typically organized brain would be "B" because the right hemisphere would be judging the facial expression by the left side of the face. Jaynes predicted that people who were bodily left-lateralized in every way would be even more likely to chose "A."

• Out of the 19 people who responded fully, 10 were right-handed and 9 were left-handed.

• Of these 9 left-handers, 4 were left-lateralized across the board. Yet, 2 picked "A" and 2 picked "B." The "A" pickers would be judging the face with their left hemispheres, as Jaynes predicted, with hemispheric functions presumably switched; whereas the "B" pickers, me included, would be using their right hemisphere for facial recognition as well as for language.

• Of the 10 right-handers, only 2 were right lateralized across the board. One picked "A" (atypically) and the other "B."

I don’t know what conclusions we can draw from these results other than the fact that there is a fair amount of mixed dominance amongst my friends, virtual or otherwise. In addition to questioning that the extremely left lateralized would more likely pick "A," as Jaynes had said, I wanted to test the conclusion of the Scientific American Mind article that people with right-hemispheric dominance were more likely to believe in or experience paranormal phenomena (see again The Eye of the Beholder). Only two spoke up here: one was left-handed and the other mixed, adding left-handed me, that makes 3. So far so good. Are there any more of you out there???