I'm not one to shun anomalous possibilities. If enough strange things happen to you, it's difficult to dismiss the uncanny as all in your head. But, I do tend to think that certain people, owing to genetic predisposition and traumatic experiences, are more open to paranormal experiences. What is the most traumatic experience of all? Dying, of course.

I've just finished reading Pim van Lommel's book, Consciousness Beyond Life: The Science of the Near-Death Experience. In 2010, I met van Lommel and heard his presentation at the Toward a Science of Consciousness conference in Tucson. He was a serious, intelligent fellow, noticeably Dutch in his yellow pants. Van Lommel is a cardiologist whose job is bringing people back from cardiac arrest. He had heard so many tales of NDEs in his practice that he began to research further. His book is a laudable effort to explain the unexplainable, to grasp the unknowable. 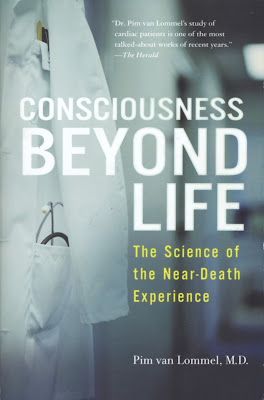 He says that people undergoing NDEs have heightened intuition, clairvoyance, premonitions as well as increased empathy for others, both during and after their experience. It's as though the mind, once opened, remains open, at least for a while. Children are more prone to NDEs, especially through near-drowning. The aftermath can be negative: hypersensitivity to sense impressions, strong emotions; alcohol or drug problems; ADHD, depression or suicidal tendencies. Van Lommel cites Kenneth Ring's connection between out-of-body experiences (OBEs) resulting from childhood trauma and a later propensity to have NDEs.

Sensing presences, usually departed relatives, and going toward a light in a tunnel are typical of an NDE in all places and at all times. Dutch painter Hieronymus Bosch depicted this in Visions of the Afterlife in the early 16th century. Speech is not necessary in NDEs as verbal communication happens seemingly telepathically. Because of the euphoric sensation, NDErs often do not wish to return to the world of the living until their "spirit" relatives convince them that they must.

Van Lommel spends about half the book describing NDEs, then  explains them scientifically. First he says what they are not (e.g. oxygen deprivation), then what they are: nonlocal, quantum physical events. In an eternal present, past and future are relative and space can be traversed instantaneously.

I will say that his description of "endless" consciousness as the material world's particle function collapsing into a nonlocal wave function is a useful mental construct that made sense to me. But I'm not sure if I agree that the medium for these messages is in our DNA, as he suggests.


It is well known that environmental effects can either suppress or trigger gene expression. Animals seem to have greater nonlocal connections, witness the tight formations of birds in flight or busy bees following the dictates of their queen at a distance. This is evidence of their genetic unity and of the social composition of their groups. But their brains are much smaller and less complex than ours, making their seemingly robotic adherence to their clustering effects possible. It is also well known that animals can sense dangerous environmental happenings in the near future, like hurricanes, tsunamis, etc. or that their masters are on their way home (Sheldrake). Little gets in the way of their survival instincts.


In human consciousness, in order for the more anomalous features of consciousness to occur, parts of the brain must be offline, shut down or damaged. This is what allows the generally non-verbal visions and knowledge to arise. Dreams, hypnosis, meditation, mental or developmental disorders, epilepsy or altered states brought on with psychotropic drugs are examples.

A friend of mine is an intuitive healer. In a video interview, she describes how a part of her mind stands aside as she receives inner wisdom that helps her heal herself or others. Van Lommel also cites scientific evidence where fMRIs have registered active changes in the clients of healers who were working at a distance. 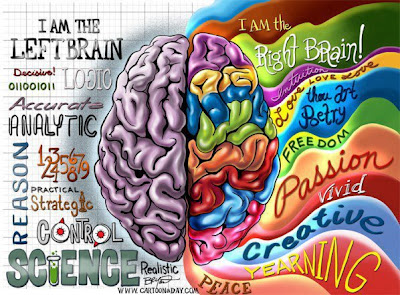 Doesn't it make sense that the particle function would rely on the logical left, whereas the right would let in the light to both guide and console during our most trying times? Even this beautiful image, frequently seen on the Internet, shows right-brain functioning as "waves."

Trauma plays a role in opening the mind to the right's associative and/or dissociative wisdom. My friend's experiences with voices began after her mother died and she had started meditating. Both trauma and practice gave her the entry which began, literally, with external fountains of light that she could turn off and on at will. The Sufi poet Rumi once declared: "Don't turn your head. Keep looking / at the bandaged place. That's where / the light enters you."

When I got the startling dream message, "Freud only got it half right. Read the two Hyperion poems," perhaps it was a nonlocal communication from Jung himself. Or perhaps I was dictating to myself through a quantum field what was already known to me in the future. That my dreaming mind could create such wizardry on its own seems unfathomable to me.

In The Secret History of Dreaming, Robert Moss* tells how cigar-smoking Freud, in a dream reported by one of his early patients, got a glimpse of the oral cancer that would cause his death. Unfortunately, Freud failed to recognize what would seem a warning designed just for him. Jung, highly predisposed to voices and visions and practiced in active imagination, had a late-life NDE where he catapulted from his body into outer space during cardiac arrest. The more left-brained father of psychoanalysis sought out the particular sexual underpinnings in the mental illnesses of his clients. The right-brained Jung saw the archetypal dimension that we all share. His notion of the collective unconscious could be explained using the nonlocal paradigm. But maybe the right hemisphere deserves some credit for allowing the magic to happen.

*Moss's bio says he survived three NDEs in his own childhood.


*Content originally appeared on CartoonADay.com (http://www.CartoonADay.com), and is made available through a Creative Commons Attribution Noncommercial license (http://creativecommons.org/licenses/by-nc/2.5/).