Consciousness of the Future at the TSC 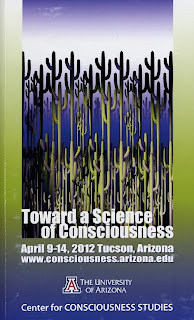 The Toward a Science of Consciousness (TSC) Conference has been going strong since 1994. Faithful followers and newcomers are equally aware that consciousness studies are still evolving, moving closer, albeit elusively, toward an understanding of what consciousness is and how it arises. No one claims it’s some sort of brain substance: it's a process, not a thing and it definitely arises through interaction with others and the environment. What’s nice about this conference is how it explores both the hard scientific and philosophical matters—How does consciousness arise? Do we have free will?—and the other phenomena, harder to prove —Does consciousness survive death? Can we foresee the future (precognition)? Can acts in the future affect the past (retrocausation)?


The large gathering includes neuroscientists, philosophers, psychologists, neuropsychologists, anesthesiologists, spiritual types, survival of death advocates and literary people (like me, although a minority). I heard a talk on consciousness in Virginia Woolf this year and had a pleasant interchange with the speaker, a philosopher, afterwards. There was an interesting mix this year of old codgers with dodgy ideas and young things who spoke articulately and with ease at the podium.

I was especially interested in hearing Daryl Bem’s research on precognition, a psi phenomenon claiming anomalous information or an energy transfer from the future is possible. I’ve experienced it myself whether in dreams, through imagery, or as a startling command in a relaxed moment as a future happening jolting me to consciousness with a clarity beyond words.

So, yes, Bem was testing the precognitive detection of erotic stimuli. He determined that the extroverts, the high stimulus seekers, did better on the test: 53% vs. the random 50%, which is significant. The same students were also better at precognitively avoiding negative pictures. The conference attendees seemed very receptive to Bem’s research. David Chalmers said people will claim it is sloppy work or fraud, if they’re not inclined to accept the results. Stu Hameroff said a lot of positive results are being suppressed; at another moment, he said we’ve had backward time effects for thirty years. Hameroff had explained this possibility through quantum consciousness, or “quantiousness” in a previous talk of his own. Both highly influential researchers, the former a philosopher and the latter an anesthesiologist, were the original founders of the Toward a Science of Consciousness conference.

Near the end of Bem's session, a woman in the first row raised her hand and said, “Unless you’ve experienced this phenomenon firsthand, you’re not likely to believe it.” She went on to explain how she met the man who would become her husband and instantly knew they would marry. Bem said, “I can’t tell you how many stories I’ve heard like this and I don’t pooh pooh them any more.”


The previous evening I had explained to a young conference attendee, whose task was to explain free will in a poster session the next evening, my own precognition story. Sitting on a park bench during my college days, I saw a student walk by and instantly knew that I would marry him, even though we had never dated and I had only met him once a few years before. I did indeed marry him several years later, despite intervening events that might well have derailed my fate. Here in the present, the young, "free will" guy from the night before, now sitting a few rows up, turned towards me. I gave him a thumbs up.

I’d like to see consciousness studies take more into account the “anecdotal” stories that seem to confirm that psi events do occur. As it stands, researchers are required to use scientifically verifiable, repeatable experiments, using random number or image generators, to prove that precognition or retrocausation exist. Why not just listen to the stories of people who have actually experienced the startling phenomena, a method in vogue in the 19th century but, regrettably, no longer in use. I’m not saying it’s all real or that everybody can do it. But close couplings and highly emotional stimuli seem to defy time and space somehow--even if it's just the distance between two heads. I’ve written about this before and you can find my article here, published in the Journal of Consciousness Studies. I might add that there was an absolutely convincing session on remote viewing at the conference. Hameroff, by the way, stands by the theory that consciousness can exist outside of the body at higher frequencies.

You can see Stu Hameroff speaking in a group of four about consciousness after death at 1:04.

Carole, Here's a story for you. In his early twenties, my son started a new job in computer programming. He came home after his first day and said to me, "I just met the woman I'm going to marry!" I said, "Great! You two must have really hit it off." He replied, "Well, not exactly. We didn't talk. But I just know I'm going to marry her." It took awhile, the girl had just ended a relationship and wasn't interested in getting into another right away. But they did become good friends, and...10 years later, they are married (five years ago), both love anything to do with computers, and have a beautiful nine-month old daughter. My son never wavered from his first impression...we all love his choice!

That is a great story, Nina! The heart/mind does seem to have this future knowledge, even if circumstances are not just right when the revelation comes to us. P.S. Jung actually heard a voice telling him that he would marry Emma when he first saw her at her father's house. There are degrees and degrees of revelations.

I think it is telling and interesting to look at brain injuries and the effects on consciousness. I have had close personal contact with Alzheimer's patients ... and they are alive, but their consciousness seems as damaged as their gray matter. there is a neurologist who talks about this. As far as I can tell, consciousness is composed of thoughts and without nerves that function properly to conduct electro-chemical impulses, there are no thoughts. I have similar reservations about a soul. Generally a soul is conceived of as being able to "see" even without a body. So, when eyes are damaged, why doesn't the soul "see"?

Thanks for commenting, Vince.

I understand what you are saying. Here's my take on my own experience and others' I have read about. Thoughts do not have to be in linguistic form. When I had my intuition/epiphany about the man I would marry, I heard no words. It was just an instantaneous knowing, a jarring recognition. When I used to do yoga, I got images in response to questions I would put to myself, sometimes in the form of "if this, then that" images or a picture of the exact location of my missing keys, for instance. The only time I had actual words come through was in a dream (see Hearing the Voice, Getting it Right on this blog. Even then, the voice was very guttural, not my own, but so highly out the ordinary in its message and relevant to my concerns.

In each of these instances, the messages were coming from me, but from a neurological frame outside of ordinary experience. In fact, with closed eyes I could "see" the answer. I make no claims about the existence of a soul.