The Man Who Could Fly: St. Joseph of Copertino and the Mystery of Levitation 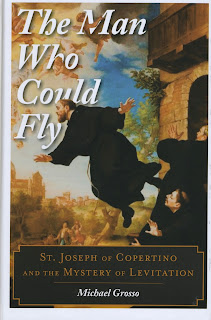 Compensation
For each ecstatic instant
We must an anguish pay
In keen and quivering ratio
To the ecstasy.
For each beloved hour
Sharp pittances of years,
Bitter contested farthings
And coffers heaped with tears.

Michael Grosso, a prodigious and excellent writer, has been studying the far side of consciousness for some time. His online article, “Inspiration, Mediumship, Surrealism: The Concept of Creative Dissociation,” excerpted from Broken Images, Broken Selves (1997), was the first meaningful treatment I encountered on puzzling phenomena of great interest to me both then and now.

Grosso’s The Man Who Could Fly is a full-length treatment of St. Joseph of Copertino, a 17th century priest with the uncanny ability to defy the law of gravity: he could levitate! Grosso has read all the sources pertaining to St. Joseph and goes much further and deeper to explain the saint’s “ecstatic dissociation.” As he says elsewhere, in a more global way, “For anyone interested in probing the mysteries of consciousness, it's the deviations from normal function that open things up. Sleep deprivation, fasting, fatigue, crisis, solitude, near-death, madness, terror, psychoactive drugs, and so on.”

In the case of St. Joseph, he suffered early childhood trauma with an “ungiving, unforgiving” mother; a long childhood illness living in unhygienic conditions; and a large, infected, foul-smelling growth on his backside. He found great consolation in being carried to church, leading to an outsized worship of the Madonna. He compensated further through bodily deprivations like fasting and wearing a hair shirt. His lack of maternal affection, self-mutilations, loneliness, avoidance of women, and all-encompassing devotion to the Madonna produced ecstatic states, telepathy, precognition and a life in the priesthood, where his levitations began.

I believe, along with Grosso, that St. Joseph had a mental organization differing from the norm.  As Grosso says, “a slight verbal or visual association might trigger an involuntary episode of ecstatic rapture.” An associative, rather than logical, linear, mind makes a case for the saint’s enhanced right dominance. He also suffered extreme, alternating emotional states. When he was depressed (right hemispheric), his ecstasies subsided. “Hideous dreams and diabolic imaginings assailed him.” On the other hand, almost anything could prompt an ecstatic reaction, suggesting mania. His eyes turned upward and he recited rap-like rhymes, both left-inspired tendencies. As he lay dying, he felt his heart burning in his chest from love and light, as he dissolved into God, a boundless selflessness, which I have suggested elsewhere, suggests the synchronization of the hemispheres.

Grosso says that Joseph’s ecstasies were sublimations of his “displaced sexual desire.” Suppressing the sexual urge and mortifying his body no doubt allowed a compensatory mechanism to bring immense pleasure of another sort into his life. Likewise, Kraft-Ebbing pronounced in his Psychopathia Sexualis: “Mystical ecstasy is a kind of over-compensation for physical pain.”

Ultimately, Grosso explains mystical experience as kind of stepping out of the body, which can include levitation, allowing pure, “irreducible” consciousness to sally forth unbridled. We will never know the bliss of supreme reality, as long as we “are ‘nailed’ to our bodies.”

Of course, all that I have said is just a bare outline of the depth of Grosso’s research. I highly suggest you engage with the book yourself. Be prepared to expand the borders of your mind for a deeper and wider appreciation of human potential.

Email ThisBlogThis!Share to TwitterShare to FacebookShare to Pinterest
Labels: ecstasy, levitation, Michael Grosso, St. Joseph of Copertino, The Man Who Could Fly

Good summary of his book on St. Joseph levitation! I know a Chinese qigong master who levitated up 9 feet while in full lotus padmasana meditation after his 49 day cave meditation, no sleep, no food, just full lotus the whole time. http://springforestqigong.com - his "external qi" healing was proven by the Mayo Clinic randomized controlled study, led by Dr. Ann Vincent, with results she called "especially impressive."

Fascinating! I'll report that to the book's author.