The Maid of Orleans: The Life & Mysticism of Joan of Arc 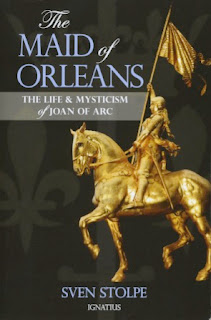 This is the sixth book on Joan of Arc that I have now read in preparation for a chapter in a projected book, “Females Mystics and Mediums.” Every book has had its own angle into the heart and mind of Joan.

The Swedish Stolpe, a convert to Catholicism, takes a decidedly religious angle, to the point of comparing Joan’s horrendous death to that of Jesus, a martyrdom both required for the sake of others. There had been a prophecy that a virgin from Lorraine would save France from the invading English. Stolpe says Joan was “extremely well balanced,” denying that her voices and visions were the product of an unstable mind, whether psychotic or epileptic. Importantly, Stolpe does accentuate the troubled times and violence continually inflicted on Joan’s village, a persistent childhood trauma which, to my mind, could call into play dissociative voices trying to alleviate her anxiety through extraordinarily brave, inspired action. Stolpe does note that the sound of church bells brought on Joan's voices. While this may be a sign of epilepsy in other writers’ views, for Stolpe, hearing voices in a solid, sensible girl could only be explained through her pronounced mysticism.

While quite certain about her mysticism, Stolpe is evenhanded in other regards. He does not support many legendary claims, like Joan’s recognizing in a crowded room of courtiers the king, Charles VII, she had come to crown. Stolpe finds this improbable and regularly tries to sort out truth from “the jungle growth of legend” surrounding Joan.

Stolpe sees Joan principally as a “typical mystic,” a calling other biographers have neglected in their accounts. It seems he has entered Joan’s head when he makes statements like, “Now Joan understood.” He also refers to Joan’s “intuition.” I like how Stolphe compares poetic genius to religious genius, which would have been Joan’s mainstay; yet, she never seemed to be in a state of ecstasy like many mystics, as he says. There was something different about her. When bullied by the judges at her trial, without a counsel for her own defense, she gave brilliant answers, a sign that her voices had some kind of genius level ability to provide cunning, non-incriminating answers. While she was a “holy woman,” being used by the “great spirit who deigns to use her as his instrument,” she was not a “military genius.” Rather, Stolpe says, her mere presence gave the French soldiers encouragement to fight.

In the end, Joan’s death, for Stolpe, was not a tragedy, but rather willed by God as “a sacrifice for all the cowardly, the cold-hearted, and the arrogant.” It is quite clear that she had a brave, highly religious heart and the pure mental determination to overthrow the English yoke, by whatever means possible. I suspect one’s own religious or non-religious persuasion will win out in the end when judging her successes. But, decrying the brutal, fiery end of this inspired young woman, from whatever the source, I would think, should be universal.